Forget the Cynics, the Odd-Even Scheme is a Necessary Step in the Fight Against Pollution

Forget the Cynics, the Odd-Even Scheme is a Necessary Step in the Fight Against Pollution

Given the chronic lack of political will, only citizens can eventually force changes in government policies by adopting saner and healthier lifestyles.

The poisonous smog that has enveloped Delhi and the NCR for days on end seems to have temporarily jolted Delhi citizens as well as Delhi Government out of its “chalta hai” attitude resulting in the announcement of modest remedial measures like reintroduction of Odd-Even Scheme introducing partial restrictions on plying of private cars.  If the air quality improves just a wee bit so that the poisons we inhale are not visible as during the thick smog days, all is likely to go back to business as usual and the media too will move on to other sensational issues.

Last year, vested interests managed to discredit the Odd-Even Scheme by convincing people that it had zero impact on improving air quality during the period it was under experimentation despite the fact that most citizens found it useful and compliance rate was very high.  The negative publicity given to it in the media, forced the AAP government not only to withdraw the experiment but also put the entire issue on the backburner.  But this year, in a shocking move, the National Green Tribunal (NGT) first put the whole plan of action on hold by asking the AAP Government to first prove to NGT’s satisfaction that restrictions on use of cars is actually beneficial.

Of the many thoughtless orders emanating from the NGT, this one is most perverse.  One expected NGT to demand serious implementation of Odd-Even along with additional measures because it has proved efficacious in other countries battling air pollution.  Just today, Mexico’s ambassador to India has written a lead article in one of our national papers detailing her country’s success in implementing multiple measures, including “Hoy No Circula” (a day without a car), adopted by Mexico City in improving its air quality. ( “Lessons from Mexico City: Series of steps needed to signal that life can’t go on as usual when air so toxic” The Indian Express, November 10, 2017). 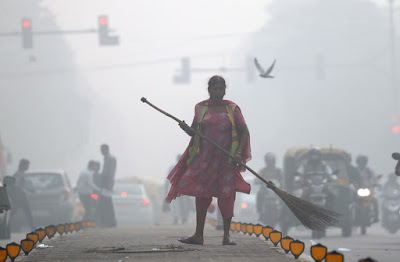 Instead of following those leads, the NGT in a totally uncalled for move has discredited and nipped in bud the very idea of controlling the burgeoning numbers of motor vehicles in the city. For the record, the same NGT had banned cycle rickshaws from plying in many areas using the absurd argument that they cause pollution. This when manually pulled cycle-rickshaws are the most eco-friendly mode of short distance transport. They neither consume carbon fuels nor create noise pollution. Our organisation Manushi  which succeeded in getting a new policy and law in favour of eco friendly cycle rickshaws legitimized by the Delhi High Court and Supreme Court of India– has had to battle NGT’s Tuglaqi farman in NGT’s court.

Within a day of stalling Odd-Even, the NGT took an about turn and asked Delhi governmentto go ahead with Odd-Even but without the proposed exemptions to two-wheelers and women drivers, given the concerns regarding safety of women. But as Delhi based women’s organisation Jagori pointed out, most working women use public transport. Only a small percentage use own cars. They can easily switch over to cabs. As for two-wheelers, the Delhi government has argued that the existing public transport system cannot possibly handle the massive increase of users if use of two-wheelers is also rationed. But for this they have only themselves to blame since in the last three years they suffered total amnesia regarding their 2015 electoral promise to add 10,000 buses to the DTC fleet. So far not a single bus has been added to the DTC fleet. NGT is also right in accusing that none of their other orders regarding pollution control have been heeded thus far by AAP government.

Thanks to the ongoing tussles between Delhi government and NGT, the first half hearted measure proposed by Delhu government has now been shelved indefeinietly.

Odd-Even not a Magic Wand but…:It is not my case, that the Odd-Even Scheme is the proverbial magic wand that can solve the problem of air pollution in one stroke.  However, it was a significant first step to drive home the message that the government alone cannot handle handling this serious challenge and that it requires mass participation of citizens in more ways than one with each citizen contributing his/her bit to reduce the carbon footprint.

While in some domains, such as quality roads or power supply, the solution is largely in the hands of the government, combating environmental pollution has to be a collective resolve of both government and society.  The Odd-Even scheme is a way of making each citizen an active partner and stakeholder in the process of finding solutions to the foul air menace.  It is meant to make each of us understand that it involves daily discipline and willingness to make necessary sacrifices.

It defies comprehension how people came to the conclusion that Odd-Even Formula had zero effect on curbing pollution.  The reduction in the total number of vehicles meant far less traffic snarls. When cars move at a consistent speed instead of moving at snail space due to traffic jams, they emit far less fumes & consume less fuel.

If we want clean air, each one of us has to take the responsibility by making important life style changes.  This includes switching over to public transport, which will never improve unless elite groups of society begin to use it.  Our collective pressure will force the government to improve the quality and enhance the quantity and modes of public transport. Like many others of my class, I too was addicted to using my personal car for daily commutes.  But I am grateful to the short-lived Odd-Even experiment for having forced me to experience the benefits of using public transport.

Thanks to the continuing spread of Metro in Delhi plus steady growth of quality cab services provided by Uber and Ola, switching over to public transport is today not only possible but also more convenient and cost effective than using one’s own car.  For instance, for going to DLF Gurgaon from my house in Civil Lines, a car ride could take anything from 90 minutes to 2.5 hours depending on traffic.  But a Metro Ride in cool comfort does not take more than 60 minutes, that too at a fraction of the cost. 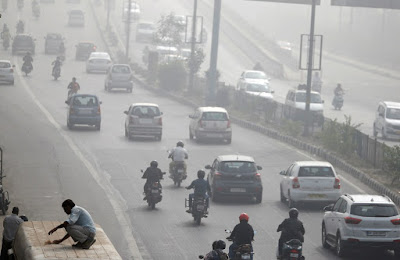 My total monthly bill of cab rides comes to less than the salary I have to pay my driver.  On top of it private car use means hefty petrol bills, car servicing and repair charges, parking charges plus the hassle of finding parking space.  Driving in choked cities also means frequent dent and scratches on your vehicle by careless drivers.  Then there is the annual car insurance and recurring expense on minor and major repairs.  Add to it the lakhs it costs to buy a car.  The annual interest one can earn on the amount one spends on a luxury car is enough to pay for taxi bills for the whole year.

I have trained my driver to do other office jobs thus putting his time to more productive use than taking me from one meeting to another and sitting idly for hours in-between. Now I never ask him to drop or receive me at the airport because it is far cheaper to take an AC cab than have him drive 30 kms through choked roads to drive me back another 30 kms.  Think of the man-hours and fuel cost saved. Today, every time I avoid taking my car out, I feel I am contributing in a small way to improving air quality.

While many of my friends and acquaintances went ahead and bought an additional car to evade compliance and sabotage the very intent of Odd-Even Scheme, I actually postponed indefinitely the idea of replacing my ten year old car with a new one, especially since the existing vehicle is still in good shape and running fine.  Even after the government discontinued the Odd-Even Scheme, I began avoiding the use of my personal car. These days, for at least 8 out of 10 trips, I use the Metro, Uber or Ola.

Some argue that using cabs is no different from using personal cars since both are fuel dependent. Firstly, most cabs use CNG, which is less harmful than petrol or diesel. But more importantly, on an average, a personal car carries just one or two persons in a day whereas a cab ferries at least 50 persons every day. When we park our cars on roadsides or in parking lots, that space becomes dead for all other purposes for that many hours.  An office goer or shopkeeper leaves his/her car parked all day occupying scarce land resource in prime locations. Today, our cities are choking with parked cars. As a result there is no safe space for pedestrians. By contrast, a cab keeps moving all day carrying dozens of passengers in multiple trips. So it actually frees road space, especially for pedestrians.

If access to radio taxis becomes increasingly easier by growth in their numbers then there would be less rationale for owning a personal vehicles. Delhi government had done well to issue a warning to radio taxi services that they cannot arbitrarily enhance changes using “rush hour” or high demand” of an excuse to up the rates and fleece passengers.  Enhanced use of cabs and autos will also provide much needed job opportunities to the huge army of unemployed in India.

Sadly, buying ever-new models of cars and owning multiple vehicles has become a status symbol. Many of my neighbors, friends & acquaintances with 4-5 adult members in the family own 8 to 10 cars.  I hope if the awareness about such thoughtful extravagance which is creating life threatening problems for all of us keeps growing, the day is not far when elite families will be as embarrassed about owning a large fleet of cars as they are today about bulging tummies, expanding waistlines and sporting multiple chins.

But the Government also needs to realize that Odd-Even can’t work as a stand-alone measure. The environmental challenge we face demands many more radical measures.  These include:

Given the chronic lack of political and administrative will in India it is we as citizens who will eventually need to force changes in government policies by adopting saner and healthier lifestyles. Be it a self-imposed Odd-Even, planting and protecting trees in our neighborhoods, or making sure construction takes place in a responsible, non-polluting manner, it is we who must become the change we want to see take place in India. Or else be ready to live sickly crippled lives.

Updated on November 14, 2017.
First posted at https://thewire.in/196275/odd-even-scheme-big-step-making-citizens-active-partners-combating-air-pollution/ on November 11, 2017

Its crystal clear: #ShaheenBagh & #KhalistaniCommie protests at Delhi borders are dress rehearsals for obstructing movement of army to borders in case #Papistan attacks with China backing